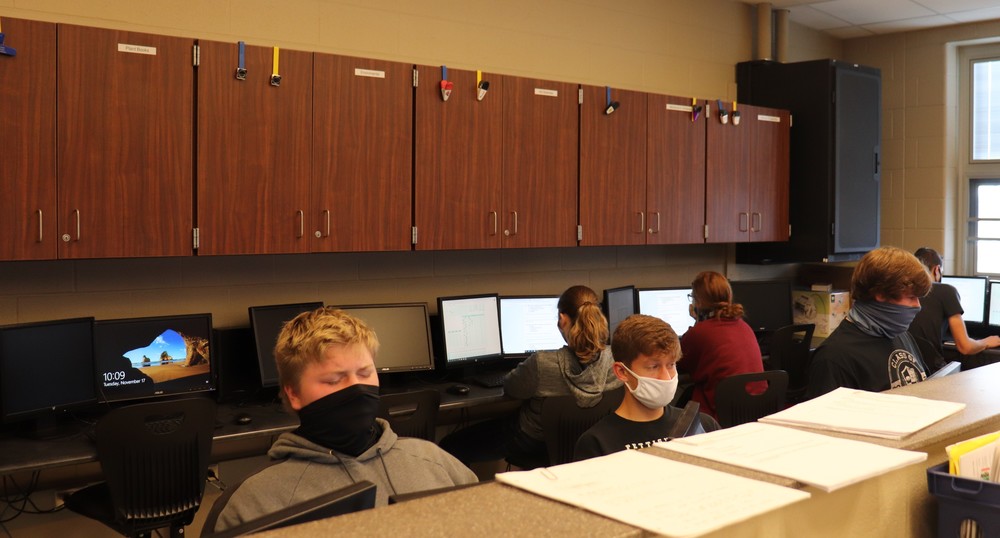 On November 3rd, 2 members competed in the virtual Job Interview CDE (Career Development Event). At the virtual contest, Mina Wesche and Grace Schnitkey had to fill out an application as well as a follow up letter.  Also, during this time, the girls were interviewed by two judges regarding their application, accomplishments, and resume. When asked what she thought about the contest, Grace Schnitkey said, “I thought it was really fun and a great opportunity to practice for an interview in a competitive way."  In their respective divisions Grace placed 5th and Mina placed 7th. There are 5 different divisions in this competition.

On November 13th, a team of 6 members including Carson Bennett, Baden Skates, Grace Schintkey, Andrew Hulbert, Keartsen Zuver, and Clara Damman competed in the Fulton County Parliamentary Procedure contest.  Karsen Pursel and Blake Eyer attended as alternates.  The parliamentary procedure contest revolves around how well members can run a meeting and follow Robert’s Rules of Order. These rules state how different situations should be addressed in a formal meeting setting. There are two different parts to the competition, the parliamentary procedure demonstration and a written individual test.  The team demonstrated their parliamentary abilities to two judges and placed 3rd in Fulton County.

A team consisting of 10 members competed on the Wildlife CDE team. On November 17th, the team completed a virtual competition where they were asked to identify different birds, mammals, fish, and reptile species plus equipment.  There is also a test and a  practicum. The team placed 4th in the district and 32nd in the state. The high scorers for the team were Carson Bennett, Leah Beck, Luke Van DenBerghe and Andrew Hulbert. Other Pettisville members competing were Blake Eyer, Kearsten Zuver, Ellie Wixom, Sophie Sterken, Lauren Shumaker, and Colton Wood.